When a hotel is designed by the same creative force that gave Vienna the whimsical Hundertwasserhaus building, you know that it won’t be plain vanilla. Rogner Bad Blumau is the brainchild of eccentric architect Friedensreich Hundertwasser. A design best described as Gaudi-esque, featuring a melange green roofs, round shapes and colorful facades make up a wonderful work of art in the middle of nature.

The hotel is build like a city with various district. In his design philosophy Hundertwasser, always that life must be in harmony with nature, aptly captured by the Rogner Bad Blauman. The hotel is located in Bad Blumau municipality of the district of Furstenfield in Styria, Austria.

From his early days Friedensreich was a painter, who later also became an ecologist and architect. His travels around the world inspired the design of his unusual buildings.

Two curative springs supply Rogner Bad Blumau with power, heat and energy. Floating in the warm water, daydreaming alone or as a couple under canopies, on the glass-covered roof or when reading in a room of silence. The Melchoir spring is the soft and mild one at the hotel. When it comes from earth, the highly mineralized thermal water has a temperature of 47.2 degrees Celsius. While the other – Vulkania spring is made up of a unique composition of depth groundwater. The mineral content of this spring far exceeds the required guideline values for curative waters. 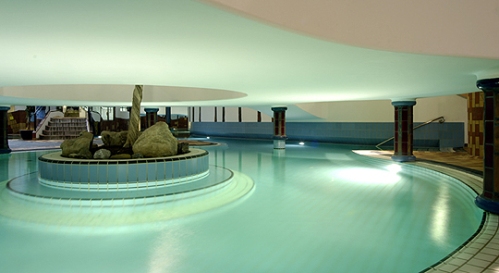 The Vulkania curative spring derives from volcanic rock and contains the highest mineralized curative water in the Styrian spa region. Collected in the Vulkania curative lake, its warm water allows for bathing out in the open. Bathers that have taken to the waters have likened the experienced to bathing in silk. 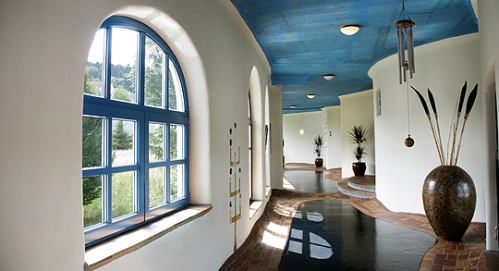 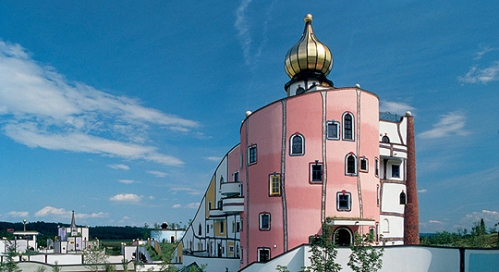