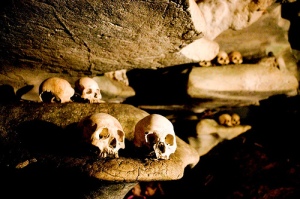 There are so many reasons to visit this land full of wonders – it’s certainly no ordinary experience. But you have to go at the right time, such as December, because Tana Toraja reaches the peak of its beauty in that month. What a Lovely December in Tana Toraja!

After being dormant for quite some time, Tana Toraja is displaying renewed enthusiasm through a South Sulawesi provincial government program, Lovely December in Tana Toraja, launched in December 2008 as part of the effort to restore the glory of tourism in this region, which has been nominated as a UNESCO World Heritage site. 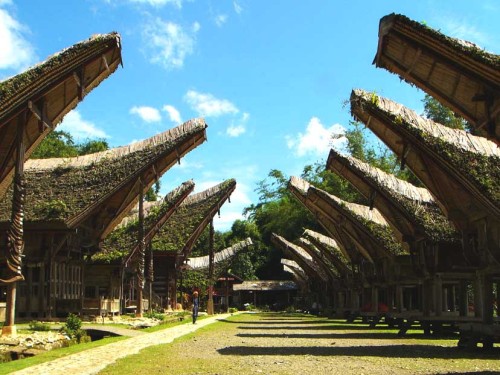 Even when it’s “quiet,” Tana Toraja constantly emanates beauty, but in this special month it’s even more fascinating. We had the chance to visit last December, and were completely entranced. 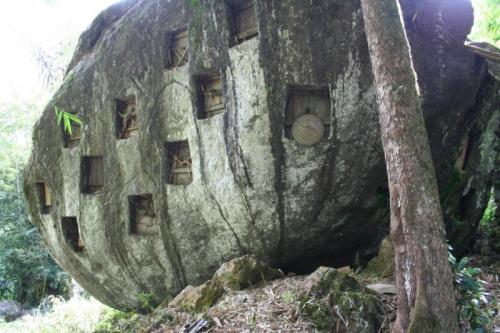 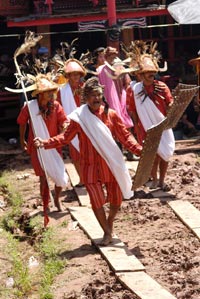 Aris, who died in April 2007 at the age of 71, played an important role in upholding the dignity of the Torajans in their struggle against the Bugis, and was a second generation descendant of Salurante, as well as a retired Army officer who fought in the Permesta rebellion.

The people of Tana Toraja have great respect for the dead. The family of the deceased is obliged to hold a major ceremony as a sign of last respect, which is divided into several stages depending on the family’s social status.

The funeral for Aris Belo Salurante was both elegant and widely publicized. One indication of the extravagance was that the series of ceremonies went on for over seven days, not only at the family home but also at an open field (rante) in which temporary shelters (lantang) with typical Torajan décor were erected to accommodate the guests. The field encompassed several megaliths, a requirement for the venue of the Rambu Solo for a person of noble descent. 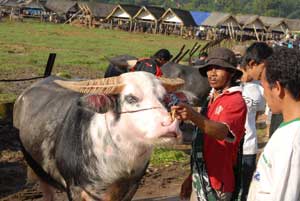 Sacrificial water buffaloes. The albino type is the most prized.

But the most prestigious aspect was the number of animals slaughtered, mostly buffalo and pigs. Entering the venue, we were greatly impressed by black buffalo with horns two meters across, not to mention quite a large number of albino buffalo (tedong bonga). Just one of these rare animals costs at least Rp 100 million, so you can only guess at how much the family spent on sacrificial beasts alone. The second son of the departed, Ratte’ Salurante, said that the family had arranged for over 140 buffalo and pigs to be slaughtered, both those they bought themselves and those donated by relatives. 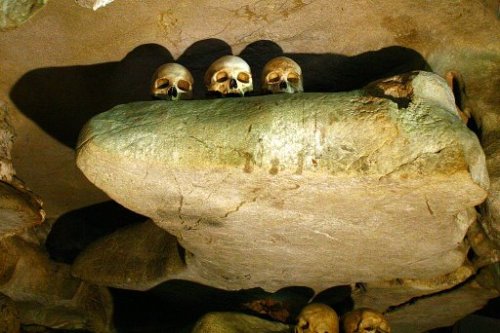 We witnessed several of the rituals. When relatives arrived, they were greeted with a war dance (Ma’randing) and then escorted around the lantang along with the tedong bonga and other animals to be offered to the late relative’s family. The war dance is not performed at just any Rambu Solo, but only at the funerals of nobles or other heroes. The guests promenade around with the animals they have brought to donate to the hosts so that their presence will be noted and the arrival of the animals will be properly recorded, with no errors. In Torajan belief, the family that receives donated animals for a funeral will have to repay the same number of animals to the other family when that family later holds a funeral. While the debt remains unpaid, it binds the families in an unseverable relationship. 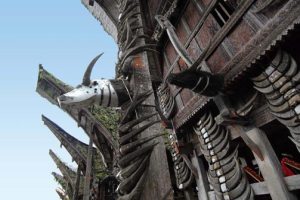 The Ma’ badong ritual is perhaps the most moving part. The relatives gather and form a circle, moving around in identical rhythm while retelling the life of the deceased from childhood to death through songs in the local language. The songs also comprise a prayer to the Creator that the departed may be allowed to enter heaven. 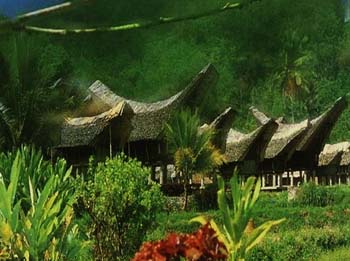 Other exciting parts of the Rambu Solo include the buffalo fights (Ma’pasilaga tedong) and the foot wrestling (Sisemba). In the Ma’Pasilaga tedong, local Torajan buffalo, with downward-pointing horns and sturdy bodies, are pitted against one another. Tourists are always fascinated by this lively event.

Apart from the Rambu Solo, another important major ceremony in Tana Toraja is the Rambu Tuka, for auspicious events such as the building of a new traditional house (tongkonan). These two ceremonies – living traditions in Tana Toraja – are the main attractions for tourists who come to visit the region.

Market Day on Christmas and Batutumonga
We had assumed there would be no significant activity during the time we were there, which happened to be Christmas, because a majority of the Torajans are Christians; we thought they would all be busy celebrating the holiday with their families. How wrong we were!

After visiting churches on Christmas Eve to take in the Christmas atmosphere, the next morning we found it was a market day. Once a week, on changing days, it’s market day in Bolu. On the market day, all basic needs can be purchased easily, particularly buffalo and pigs.

After checking out the vegetables and balo’ (arak), we headed toward the cattle section of the market. It seems that the people of Tana Toraja are not affected by red dates on the calendar, even religious holidays; if it’s market day, it must be celebrated by trading and seeking a profit.

The animal market was crowded that morning. The market area was full of trucks bringing in buffalo and pigs from various regions. And once the animals were unloaded, the market space became a huge animal market.

“Around 400 buffalo and pigs, and hundreds of traders registered with the local government, fill the market each market day,” we were told by Adi Asty, staff of the Tana Toraja Regency Tourism Service.
He added that the buffalo are brought there from as far away as Central Kalimantan, Kupang, Poso and Palopo, while most of the pigs come from Poso. 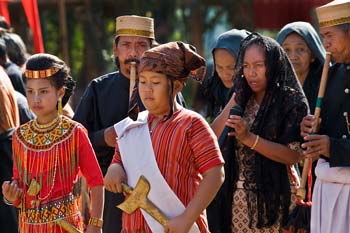 The market, formerly known as Kalambe’, fully meets the needs of the Torajans to purchase animals both for regular consumption and for traditional ceremonies. The public has a wide range of price options to choose from.

Small pigs, for example, start at around Rp 500,000, while larger ones weighing around 20 kg cost Rp 1.5 to 2 million. There’s an even greater variety of buffalo available, from the lowest quality (Sambao’) to Balian, buffalo with huge long horns that cost at least Rp 200 million each.

Adi Asty said that despite the large volume, nearly all the buffalo and pigs are sold each market day. Don’t even try to think about how much money changes hands here in the animal market; simply try to imagine how much the Torajans spend in one week just for animals. In any case, the animal market is a unique tourist attraction; as well as sellers and buyers, it’s always full of gawking foreign tourists. 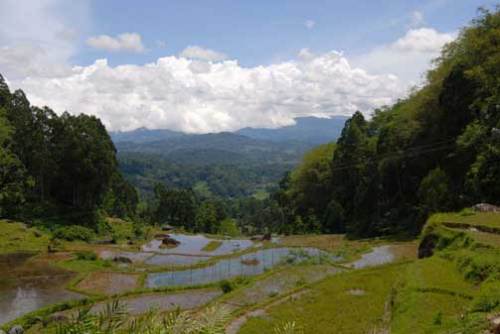 After dealing with the crowds in the market, we sought some fresh air by heading to Batutumonga. Here, at an elevation of 1,200 meters above sea level, we enjoyed the natural beauty of Tana Toraja with its long terraces, green and enticing, with many rice fields nearly ready for harvest. We were given a choice of exploring the area by car or trekking 10 kilometers through the villages. Batutumonga is 20 km from Rantepao, the economic center of Tana Toraja.

In our trip to Tana Toraja, we deliberately skipped the better-known favorite tourism objects such as Kete Ketsu, Londa, Lemo or Bori so that we could experience other, equally interesting aspects of traditional life. We saw how strongly the local culture and traditions continue to underlie daily life – tenun weavers in Malimbong village, Sa’dan and traditional sculptors (making tau-tau statues) in La’bo Karatuan village, Sangala, all of which were very enjoyable tourist attractions, especially in December.

Getting to Tana Toraja
Garuda Indonesia flies to Makassar:

It takes around eight hours to get from Makassar to Tana Toraja by way of Maros-Pangkep-Pare-Pare-Enrekang. Transportation is no problem; you can hire a car or take a bus from Makassar.