Improve your fluency of Iyengar, Ashtanga & Anusara in Tulum, Mexico

Meditating while smeared with clay and honey at a Tulum resort. Photo: Michael Nagle for The New York Times

The world of luxury travel may have anointed Riviera Maya as the “It” destination du jour, but just south of this location in Tulum is where action of a different kind takes place. One that touches the soul, through meditation and breathing exercises. Yes, we’re talking YOGA, and the area of Tulum has in recent years evolved into a must-go Yoga Destination. The following is an excerpt of a New York Times travel article a few years back that first saw this trend.

On this stretch of beach at the ruffled edge of the Caribbean Sea, 80 miles south of Cancún, visitors speak a language all their own, the lingo of Iyengar, Ashtanga and Anusara Yoga. They are comfortable with entreaties to ”leave your conditioned mind at the door” or ”melt your boundaries.” They can balance on one leg in the warrior three pose and do a headstand, and they aspire to a full lotus. When the bell rings for meditation, they sit upright for 20 minutes, intent on the sound of their breathing. 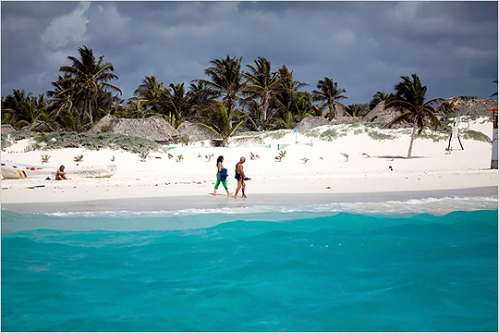 Always a counterculture haven, this six miles of rutted road, on the Yucatán Peninsula between the Maya ruins of Tulum and the 1.3 million-acre Sian Ka’an Biosphere Reserve, has lately become Yoga Central for tourists eager to limber their bodies and quiet their minds — and maybe also surf the waves, sunbathe topless and sample tropical concoctions like tequila and tamarind juice.

The epicenter of this yoga zone is a 25-acre beachfront resort called Maya Tulum, which has made itself the destination of choice for high-profile yoga teachers and their students by building state-of-the-art studios, auditioning massage therapists from around the world and organizing ecotourist excursions.

Spa at Ocho Tulum, one of the new eco-resorts of the area. Photo: Michael Nagle of The New York Times

And in the last 18 months, almost every hotel in the area — there are about 20 — has taken note of Maya Tulum’s success by building yoga halls, putting massage tables under coconut palms, hiring a Maya shaman to preside at a weekly sweat lodge or offering treatments with names like Mayan Clay Body Mask With Ocean Lagoon Watsu. At any one time, there are probably more than 300 people in the yoga zone, with scores of them doing things like trying to lift themselves cross-legged from the floor with just their hands in the scale pose. 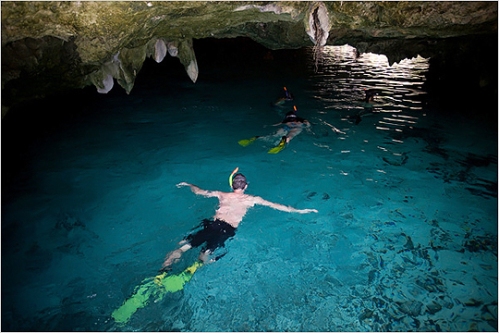 Grand Cenote, outside Tulum. For a day of snorkeling and diving to explore stalagmites and stalactites. Photo: Michael Nagle for The New York Times

At Maya Tulum and its imitators, visiting yoga students sleep in thatched-roof cabanas, without telephones or electricity and with plumbing so delicate it can’t even handle toilet paper. There is no CNN or Weather Channel. The news on any given day is whether the mangoes are sweet and the fish running. The forecast comes from the color of the sky, the crest of the waves and the wind in the palm fronds.

And if you want to go beyond Yoga, learn how to Kite-Surf. Photo: Extreme Control Kite Surfing School

The land for the resort was bought two decades ago by Pauline Clegg, a San Diego real estate developer and yoga fan who had decided to cash out in California and reinvent herself as a hotelier in the Yucatán. To continue her yoga practice, she needed to import teachers.

So Ms. Clegg invited some she knew to visit, soon hired a full-time staff to run classes for her guests and eventually filled at least half of her 44 rooms with students on weeklong retreats. More casual yoga fans can drop in on classes with the permission of visiting teachers or choose one of several classes open to the public each day. 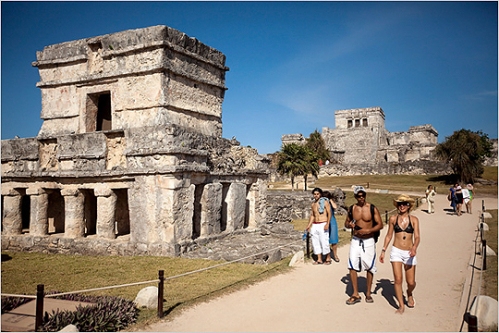 The ruins of Mayan Temples. Photo: Michael Nagle for The New York Times

Many of the students who keep this mellow resort running at close to capacity from December to April are jet-setters who could easily afford the lavish hotels and noisy night life of Cancún and its environs, virgin territory 30 years ago and now a Maya theme park. Others are middle-aged hippies who still live off the grid.

Then there is the larger group in between, baby boomers who once slept in unkempt vans and got stoned under the stars. Now they are successful professionals, most of them women, with grown children, aging parents and intimations of mortality. Some practice yoga seriously. Others are newer to the discipline that has blown across America, from right-brain California to left-brain New York during the last half-dozen years.

On the bulletin board of their yoga studios in Denver, Boston or Washington are announcements of retreats in the tropics with their favorite teachers, here or in Belize or in Hawaii. At Maya Tulum, they have paid $1,300 to $2,000 a week, meals and classes included, to study with well-known teachers. They include Baron Baptiste, the Massachusetts inventor of power yoga boot camps; Tim Miller, a Californian who was one of the first ashtanga teachers in the United States; Jonny Kest, an ashtanga disciple from Michigan; and Jenni Fox and Paul Gould, teachers of the new anusara method who were among the first to come to Maya Tulum. Guests can also choose five-day packages or shorter à la carte stays, at nightly rates of $75 to $180 depending on season and accommodations.